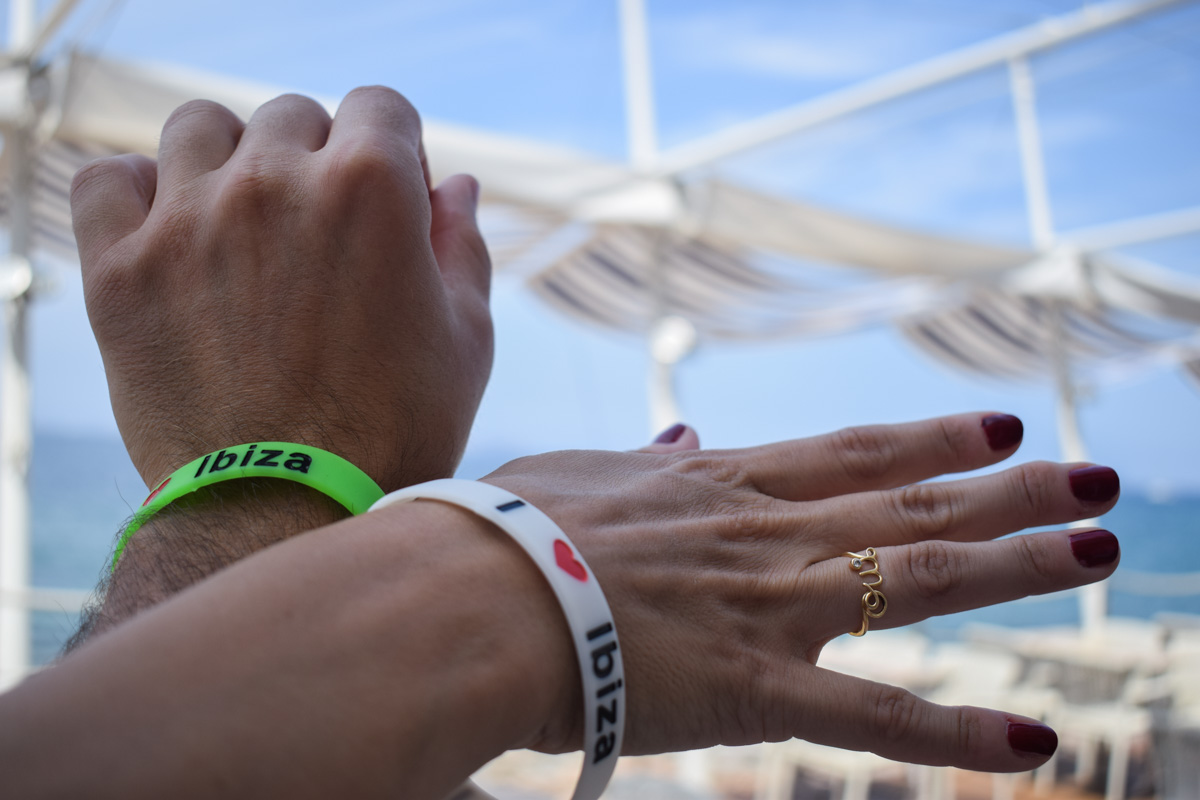 “Ibiza became popular in 1960 and 1970s, when children of wealthy parents discovered the island and decided to live here independently and far from their parents. And do you know how the famous and oldest night club Amnesia was founded? It was the house of one of those rich people who started to organise parties for his friends. Over time, more and more unknown people came to these parties and would drink all the drinks, so he came up with the idea to start charging, and eventually the house turned into a night club.”, said David, the owner of a small, but very lovely pastry shop, “Raw to go” that sells healthy cakes, very similar to those I make. Friendly and talkative, he gave us very useful information about Ibiza and Formentera, not just about the beaches that we should visit, but also about the life on the island. Ibiza was inhabited by the Phoenicians back in 654 BC, then fell into the hands of the Greeks, the Romans, the Byzantines, the Moors, and in the end, it was conquered by the king of Aragon James I who expelled the Moors. Perhaps the most interesting fact is that the island is best known for its parties and famous DJs who visit it, and not so much for its beautiful beaches and bays. Most tourists visiting Ibiza come from England, Germany and Italy and those young people come to the island with only one goal – to party. So, the island has its two sides, on one hand you have numerous beaches, beautiful nature and small typical villages and, on the other hand, a crazy nightlife with the world’s most famous DJs. Whichever side of Ibiza you choose to get to know, you won’t make a mistake. 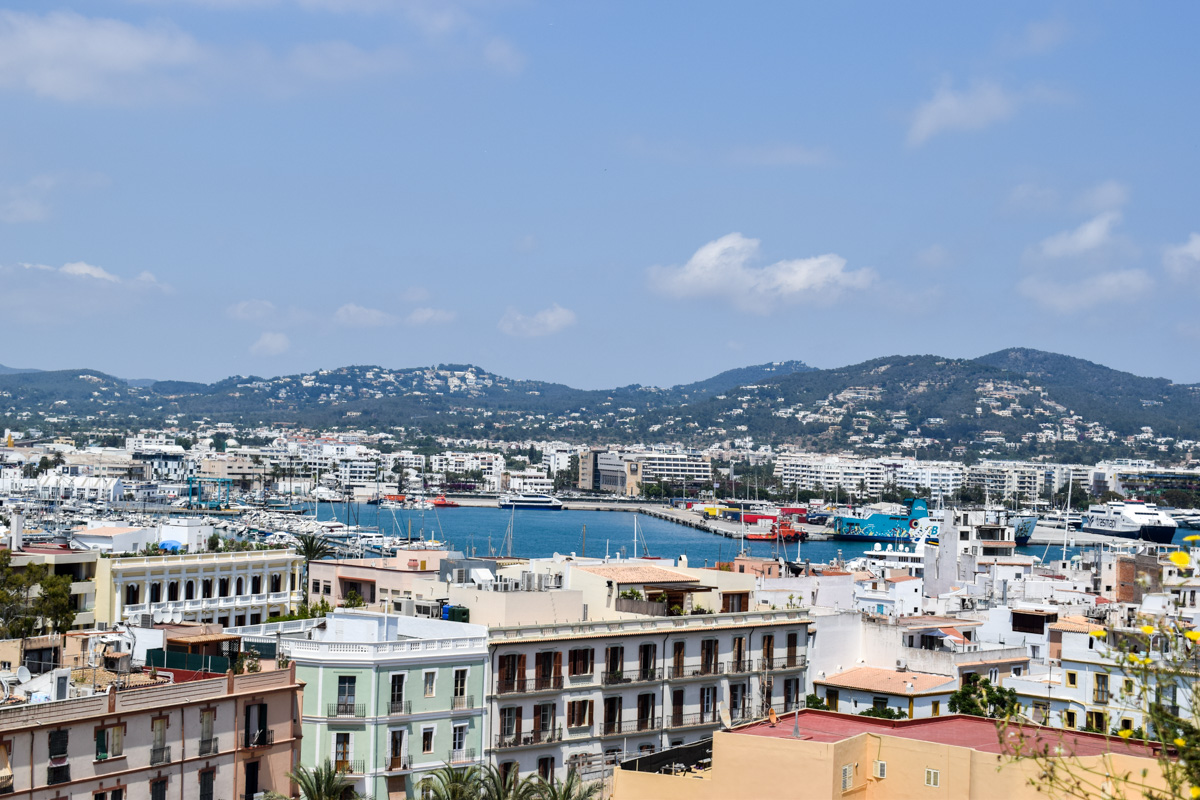 There are numerous flights to Ibiza, especially during the season, primarily from the European Union, and tourists mostly stay in the city of Ibiza or Sant Antoni. Ibiza is the largest city on the island, which consists of an old port with a fortress, nowadays under the protection of UNESCO, and the newer part of the city. The fortified old part of the city is adorable. Small, narrow, white houses are closely attached to each other, decorated with flowers, with blue doors and windows. When you look at the city from the top of the hill, you see a contrast of white and pale pink colors of houses and the blue of the sea. The narrow streets block the outside noise and open the door of a new world where the feeling of peace and tranquility still rules. 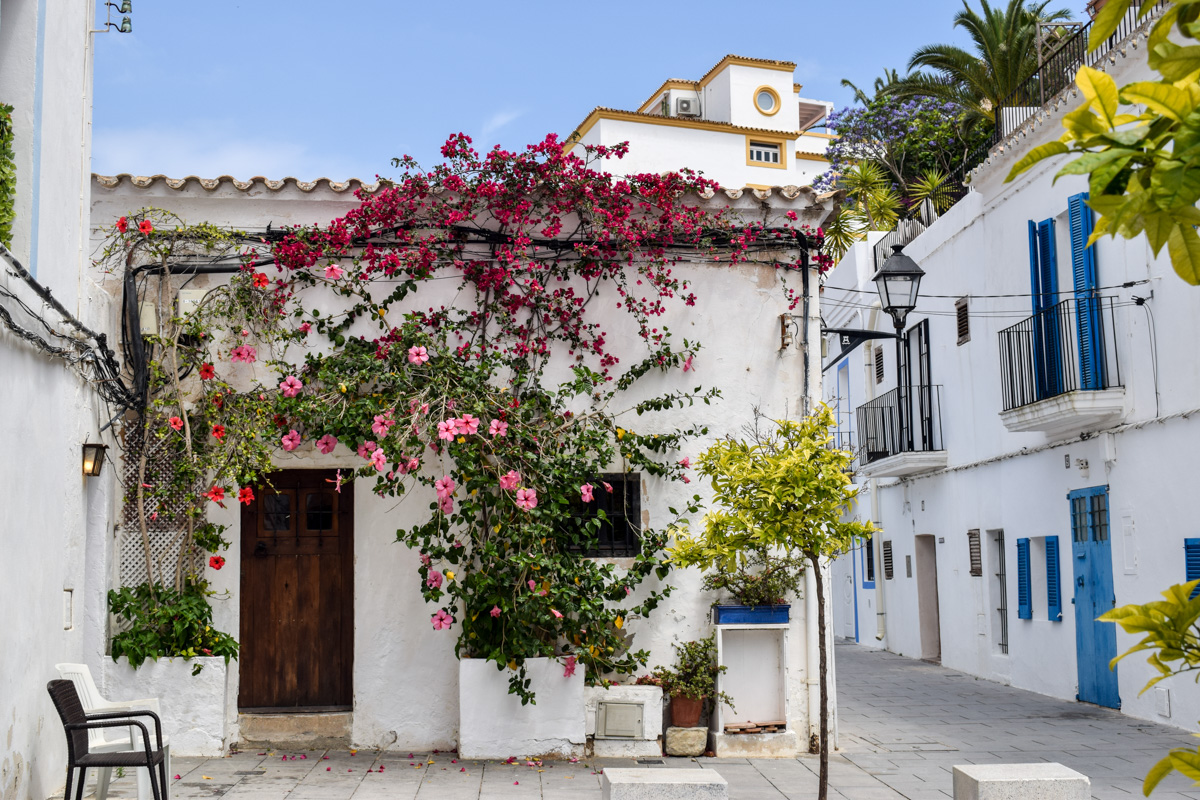 We arrived at the airport early, at 8 o’clock, and immediately headed for Sant Antoni, to the hotel we booked a week before. The hotel looked promising on the website, it had a spacious room, a swimming pool, a view of the harbor and it was located only 200 meters from the famous Café del Mar. The excitement grew, we will finally see that Café del Mar whose chill out mixes we have been listening so many times on youtube. It seems unreal that we will be in that bar and watch the sunset from its terrace. The L9 bus that drives us from the airport to Sant Antoni is pretty full and after about 45 minutes we arrive to Sant Antoni, a small town with a huge number of hotels, restaurant, a promenade along the marina and a beach you can skip as there are so many more beautiful ones in Ibiza. In conclusion, it is not the most beautiful place in the world, but it is a good base for visiting the island because the accommodation is much cheaper than in Ibiza town. 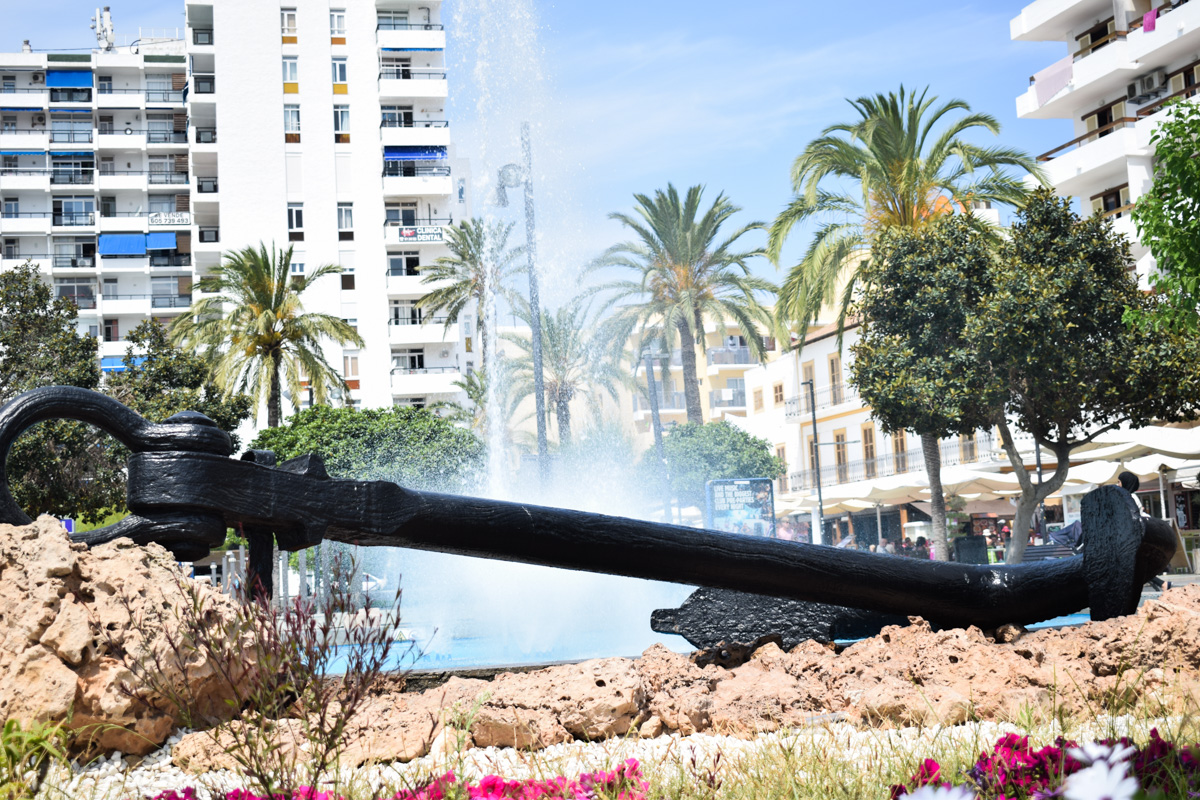 Soon we realised that, without a car, we would not be able to see anything because there are so many beaches to visit, and it would be impossible to visit more than two by bus in a day. We decided to rent a car for a day and to go as far as possible. Renting Fiat 500 for one day in the rent-a-car agency Moto Luis, which we again found thanks to David’s recommendation costs 34 euros with a security fee of 10 euros we added in case the car is scratched or something happens to it. It is very interesting and weird but in the agency they tell you to never lock the car because, especially near the beaches, there are frequent cases of car breaking-ins. So to prevent thieves from breaking the windows, it is best to leave the car open. They will examine it and when they see that you have not left anything, they will just leave. Since we come from Barcelona where the thefts are so frequent, we were not able to relax, and we constantly checked the car. Our plan for that day consisted of visiting various beaches that we previously marked on the map: Cala Gració, Cala Conta, Cala d’Hort, Cala Vedella and Cala Saladeta.
Cala Conta definitely left us speechless. Going slowly from the parking towards the beach, we were not ready for what expected us. So many shades of colour blue, from pale turquoise to the darkest blue marine merged with the blue of the sky making us hardly believe that beauty was real. The beach is extremely popular and even at the beginning of the season full of people. A small coffee bar that plays chill out music is made almost inside the rock and perfectly fits into the relaxed atmosphere that reigns here. It is difficult to leave this beach once you see its beauty, you just can’t take your eyes off it… It’s hard to imagine that there is something more beautiful on this relatively small island. 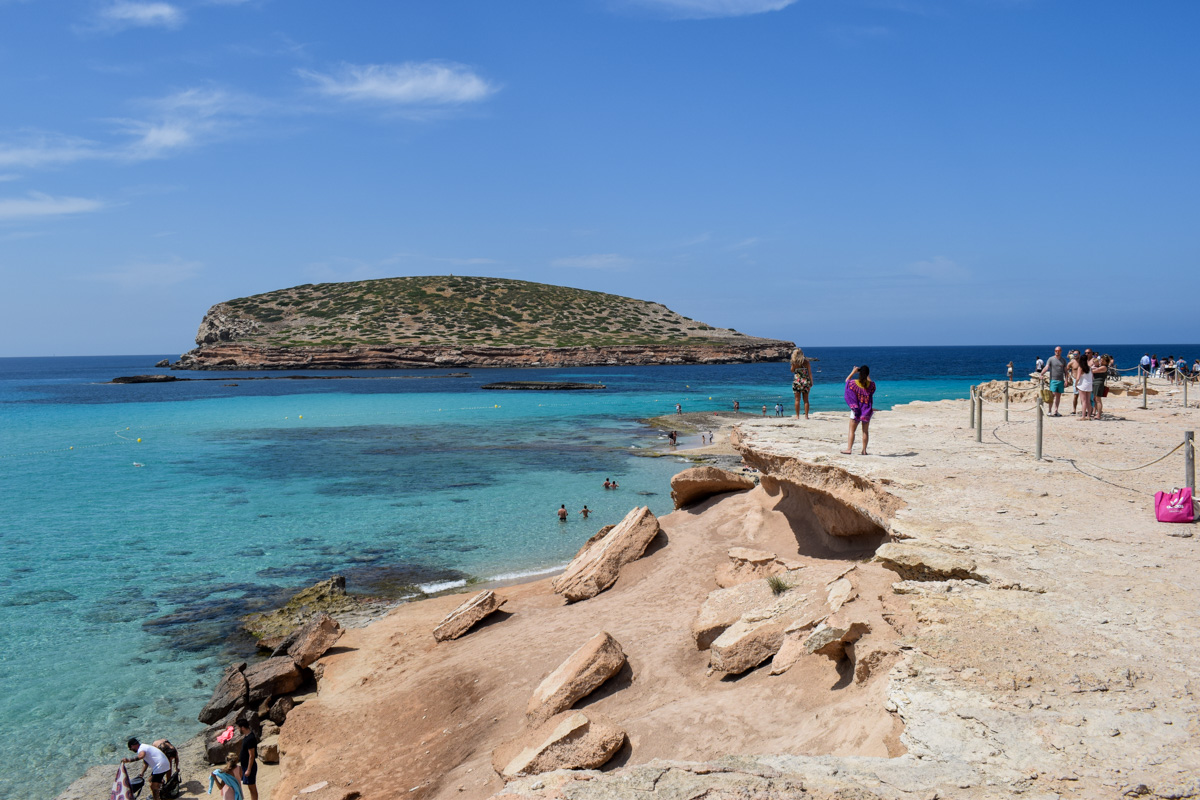 The path leads us from the beautiful beach and our Fiat leads us through the hilly roads which show us amazing views of the bays and the sea. Then the road descends to another bay, Cala Vedella, with its white hotels and a small beach that looks so peaceful from the car. On the beach there is a restaurant with sun umbrellas to protect you from the burning Sun. This feeling of peace and tranquility is incredible. You have the impression that the world has disappeared, all the problems have vanished and the time has stopped and left you to enjoy this idyllic scenery. 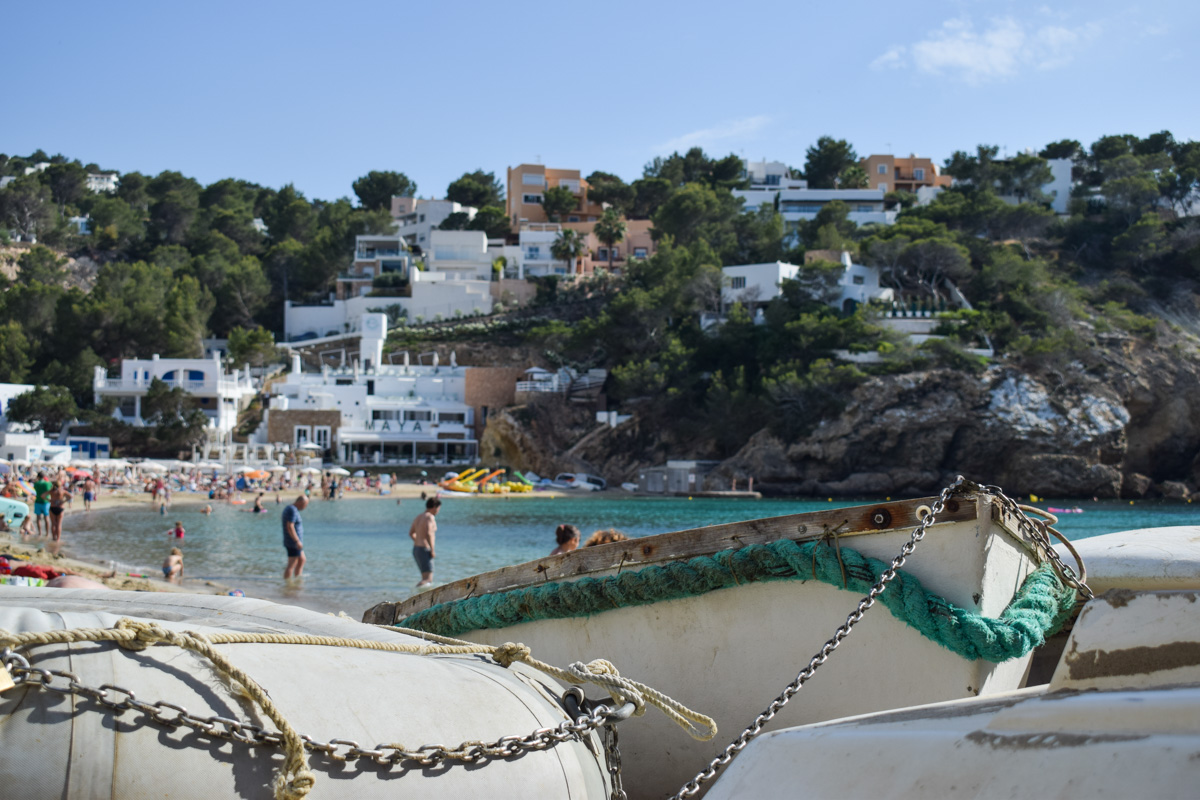 Like the previous one, it was difficult to leave this beach and go to the last one we planned to visit that day. Cala d’Hort was one of those beaches whose image strolled through Instagram and which we marked as the one we must visit. With several rocks stretching out of the sea, it reminded us of the beaches in Thailand I frequently see on Pinterest. It was almost impossible to find a place to park the car,but we succeeded and descended down the steep path to arrive to see this beautiful view. The beach itself does not have much to offer because it is covered with some dried algae and does not seem particularly appealing, but for the view it is really worth coming. 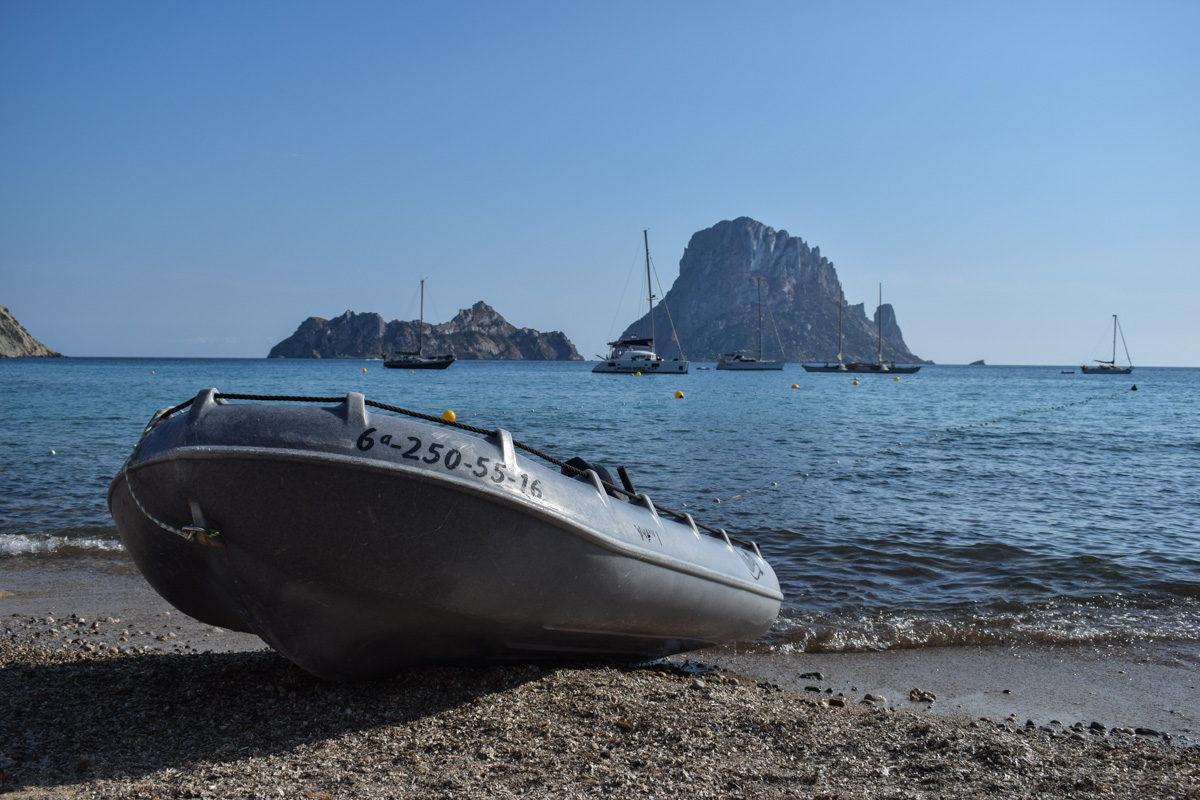 We returned to Sant Antoni for the sunset, went to Café del Mar to enjoy the sunset with the rest of the tourists, and the parties, which are just, for many tourists, pre-parties before the night clubs. 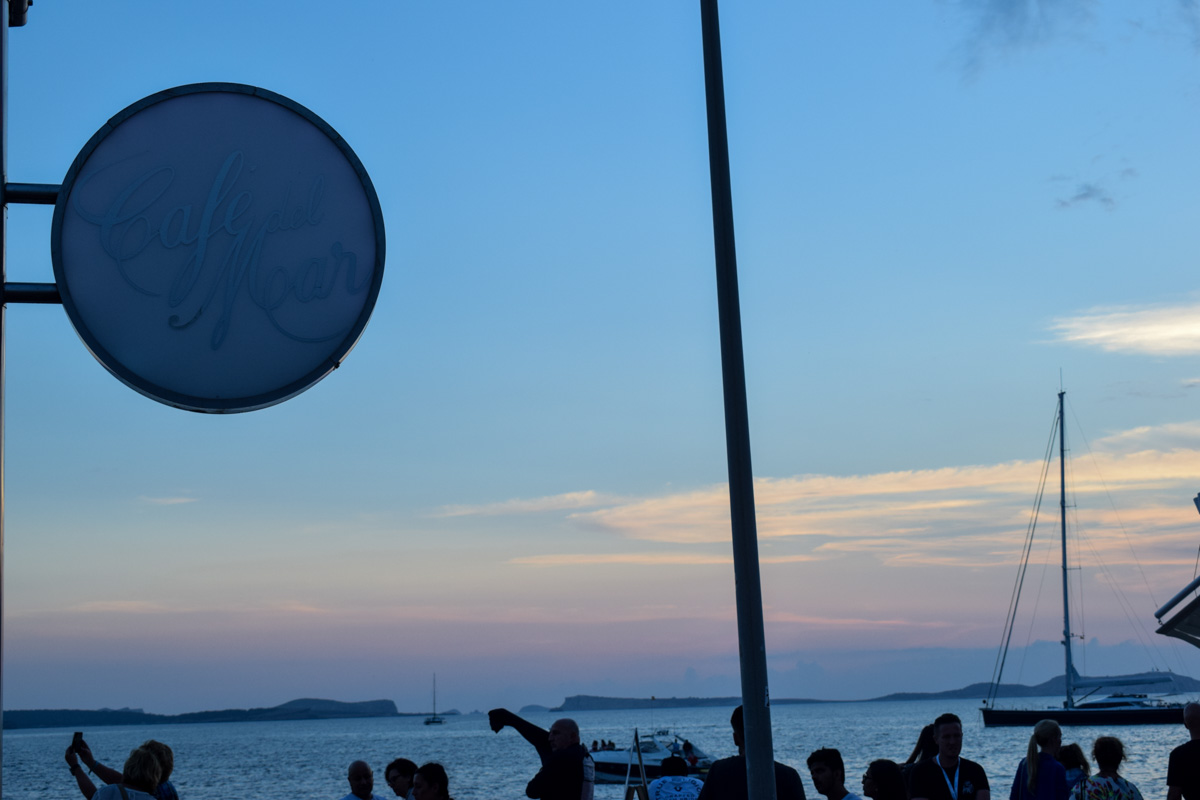 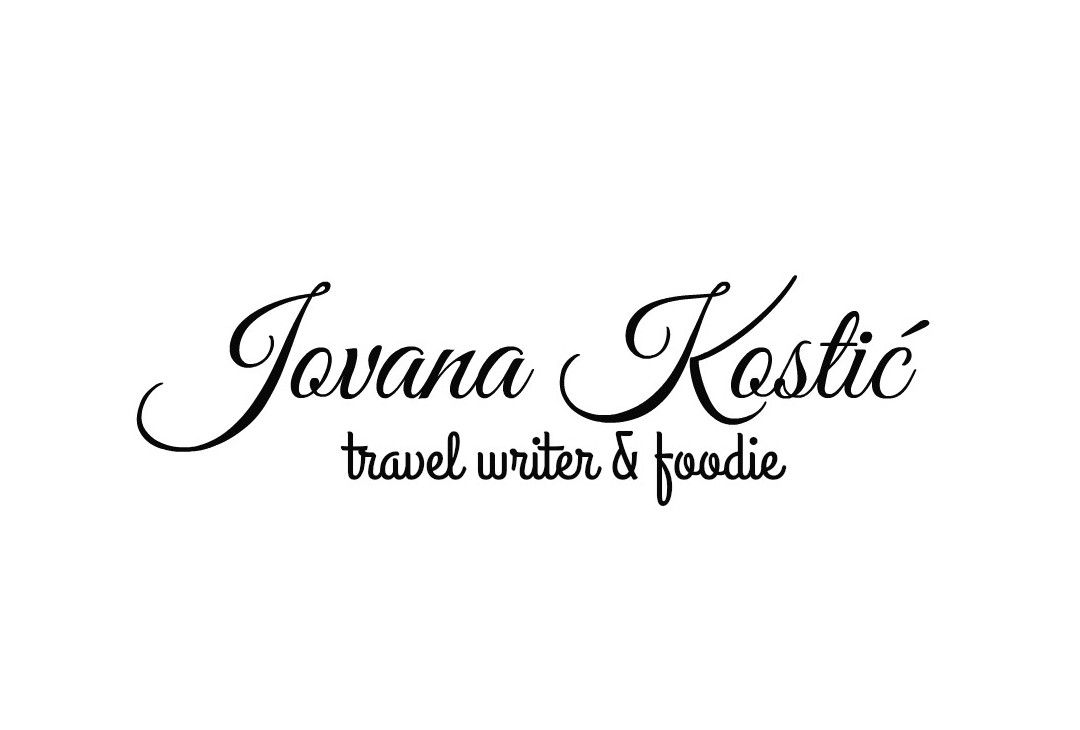